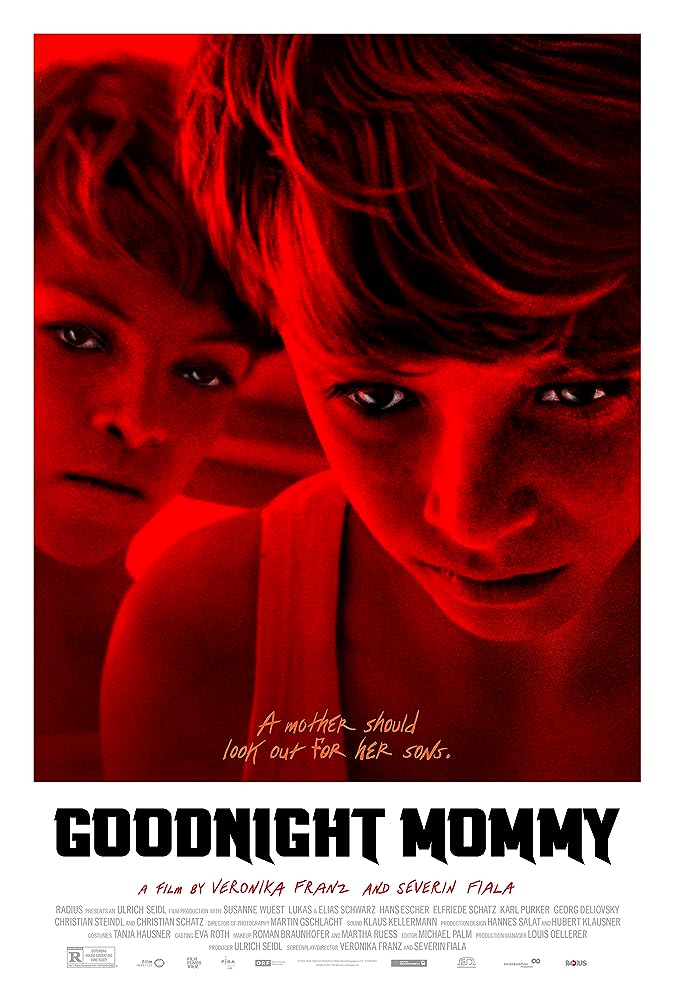 This movie is more a psychological thriller than a horror movie. It has a good story with a good looking ambiance and a good cinematography and the child actors performed well. However, the movie isn't really scary, it's more disturbing at some parts but it can be very boring too. In our opinion, this movie is a little bit overrated, because there is no real tension but it's still watchable.

The film begins with the action that the twins Elias (Elias Schwarz) and Lukas (Lukas Schwarz) play in nature. At a diving competition, Elias calls for Lukas, who no longer emerges from the water. In the next scene, you can see how the mother (Susanne Wuest) of the two twins comes back fully bandaged after an extensive facial operation. However, the mother has been acting a bit strange since she returned. She asks Elias to ignore his brother Lukas and is suddenly stricter than usual. The twins start sniffing around and find a picture of their mother with her twin sister. They are slowly beginning to doubt that this is their real mother and are becoming suspicious and aggressive towards her. They tie her to the bed and torture her to find out where their real mother is. However, that does not help and the two stick them to the living room floor, where Elias threatens to light the curtains.

Directors of this movie are Severin Fiala and Veronika Franz, they also worked together on The Lodge (2019) and The Field Guide to Evil (2018). Severin Fiala and Veronika Franz are also the writers of Goodnight Mommy. The movie won 21 awards and was nominated a total of 36 times, which is quite impressive for an Austrian horror movie. It won the Austrian Film Award in the categories Best Feature Film, Best Director, Best Cinematography, Best Makeup, Best Production Design, and many more awards for different categories. Moreover, it was nominated for the Jury Award for Best Directorial Debut, Fright Meter Award for Best Horror Movie and Best Director, and so on.

• Did you know that the actor did not receive a script?
• For the main roles of the twins 240 twins were auditioned.
• Have you noticed that the names of the twins Elias and Lukas are the same as of the actors?
• An interesting fact is that Susanne Wuest, who played the mother of the twins, decided to live alone for 3 months to prepare for the role. She also swaddled herself into bandages and kept two cockroaches as pets.
• The budget of this movie is not known but we know that it is a low-budget movie. Goodnight Mommy grossed around $2.2 million worldwide and is a success for the producers.